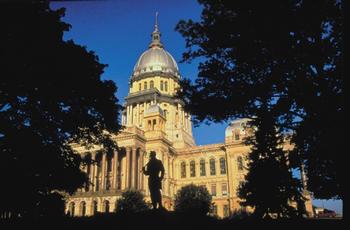 Months of negotiating and attempts to pass common sense legislation to benefit all of Illinois culminated in a hybrid budget that was passed in July. This budget has a combination of both six and twelve month appropriations. This budget measure will fund schools for another year and provide six months of funding for vital human services. We are far from completing our work; many other critical services need to be addressed when we return to Springfield for the Fall veto session. In July, Senate Bill 2047 Amendment #5 was signed into law which will fund human services and higher education through December. The legislation provided a funding source for elementary and secondary schools for the 2016-2017 academic year, such that they could start on time. Thankfully, none of Governor Rauner’s so-called “Turnaround Agenda” was part of the budget that both Republicans and Democrats overwhelmingly passed. The sad irony is that the majority of this budget bill that we passed had been introduced last May and was vetoed by the Governor.

However, the General Assembly worked in a bi-partisan manner to pass several bills such as automatic voter registration, an increase in compensation for workers who take care of the developmentally disabled, and the restoration of original eligibility criteria for child care assistance. Unfortunately, the Governor has vetoed many of these bills in the past few weeks. The legislators of the Southland and other progressives will continue to work together to pass legislation which will help all residents in the State. The following is a short summary of what was accomplished by functional area.

Please send an email to [email protected] to sign up for my legislative email blasts.

Elementary and Secondary Education: Schools are funded at 100% and all of our school districts gained additional General State Aid. For example, School District 227 received an additional $275 per student for the year. General State Aid to school increased by $361 million and Early Childhood Education by $75 million. Funding provides $250 million to high poverty schools through Equity Grants.

Human Services: Includes $667 million in funds from the Commitment to Human Services Fund for programs not currently operating under court order. It covers 65% of full funding for an 18-month period. Includes programs that were originally cut by Governor Rauner, such as immigration services, autism programs, breast cancer screenings, in-home healthcare for seniors and services for victims of domestic abuse.

Unfortunately, the impact of the state budget impasse has taken its toll on many social service agencies in the state, especially in the Southland. Many have since closed their doors due to lack of funding. Some may never return. To read how much money has been lost as a result of the state budget crisis, please read the Illinois Partners for Human Services report. https://repalriley38.com/damage-done/.

Capital Projects: This included appropriations for IDOT projects that are part of the department’s 5-year plan, EPA projects and other development projects that originally had to shut down mid-construction due to an order by Governor Rauner right after his assuming office. Many viable projects stayed shut down and did not resume receiving state funds. One of those projects was an intermodal terminal in the Southland that I had been working on for five years.

State Treasurer E-Pay Program: I was the primary sponsor for a new law which allows the Treasurer’s Office to establish and administer an E-Pay (electronic payment) program for investments made by the State of Illinois, streamlining them and making investment more efficient.   The bill was signed into law on August 19, 2016.

Extension of Home Affordable Refinance Program. This year, I was the primary sponsor of legislation to extend the HARP program to December 2016. I was the original sponsor of this bill years ago which assisted homeowners in paying their mortgages and reduced the scourge of foreclosures in the metropolitan area. To find out if you quality to refinance your mortgage through HARP, please visit http://www.harp.gov/. The bill was signed into law on July 28, 2016.

Local Government Distributive Fund: Last year, there was an attempt by Governor Rauner to cut the LGDF by 50%. Cuts to the fund would burden to the homeowners throughout the state. The revenue is used for core local services including fire and police protection, street repairs, and snow removal to name a few. The 50% cut would have resulted in approximately $6 million in less money to local villages in the 38th District. Currently, there is a lapse in reimbursing local municipalities, but the proposed cuts have not taken place.

Open Space Lands Acquisition and Development (OSLAD) Grants: OSLAD grants were suspended in 2015 by the Governor’s Office. Many park districts throughout the 38th District had projects that were pending. Some OSLAD programs are used by local communities to offer essential human and social service programs. For example, park districts provide facilities and services for persons with special needs, senior services, afterschool and summer programs, and child care for working families, just to name a few. I’m happy to report that the Governor’s office finally released some of those funds to the park districts on August 15, 2016.

Weber Road: I passed legislation to help local officials expand Weber Road and reduce traffic congestion around Interstate 55. This multi million dollar project was signed into law last month. The bill passed with bipartisan support and will help Will County acquire land needed for the expansion. Without the legislation the project could be delayed upwards of three years. This project will provide construction jobs and development opportunities around the periphery of the project.

CTA “Super TIF” Bill: I have been a strong advocate for regional equity in transit projects and funding. All of suburban Cook County pays transit taxes to the CTA but south suburban region is the only region that does not receive any CTA services in return for their tax dollars. I was vehemently opposed to the CTA Super TIF bill because there was a lack of priority for the Red Line Extension which would come south to 130th Street; close to Calumet Park. The Mayor of Chicago ran on a campaign promise that he would make the Red Line Extension a priority in January 2011. In February 2014, I passed House Resolution 675 urging the CTA to prioritize and expedite the planning and construction of the Red Line Extension.

Even though the law has been signed, there is still an opportunity to voice your concerns. The next Chicago City Council meeting is September and the October City Council meeting will vote to adopt an ordinance to create these ‘Super TIF districts’. To learn more about my opposition and how you can voice your concerns, please visit my website at repalriley38.com/CTASuperTIF.