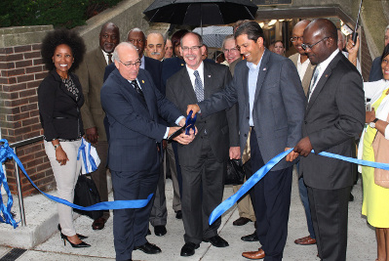 There was a party atmosphere Friday as government and business leaders celebrated the $4 million renovation of Flossmoor’s Metra station.

The rebuilt station, in full use for about a month, was dedicated in a ceremony that included a ribbon cutting and the unveiling of a brass plaque that will be placed on the station wall.

Mayor Paul Braun and village officials were joined by state legislators, Metra board members and representatives of other business and governmental agencies involved in the renovation.

“We are very pleased to dedicate a renovated facility that has been so important to Flossmoor’s success as a community,” Braun said. “A modern train station is vital to the village’s continuing success.

Braun thanked the three state representatives who were present – Anthony DeLuca, Al Riley and Will Davis – for helping fund the project. Flossmoor’s business community also deserves credit for bringing about the renovation, he said.

“I am pleased to be able to dedicate this rebuilt station, which will serve as a new and much more attractive gateway to our system and to the community of Flossmoor,” Orseno said. “We hope our Flossmoor riders will enjoy using this station for many years to come.”

With the current legislative impasse in Springfield, DeLuca said many people believe that Illinois state government is currently all about “doom and gloom.”

“That’s why events like this are such a pleasure,” he said.

DeLuca pointed toward Riley and Davis and said they were his partners in progress on south suburban projects like Flossmoor’s renovated station.

“We stick together for issues in the Southland,” he said.

The station platform, concrete foundation and north and south head house walls were completely rebuilt during the project. Substantial work was also done on the Flossmoor Road viaduct. New LED lighting at the station was installed to match street lights in downtown Flossmoor.

The station serves more than 800 riders each weekday on the Metra Electric Line.

The project was funded primarily with proceeds from Metra’s share of the state bond program. Flossmoor provided funding to cover the costs of the decorative light fixtures on the platform.