Last week, the House Museums, Arts, & Cultural Enhancement Committee  had a subject matter hearing on the topic of the Carpenter Street Underpass-Archeology Site.

The Carpenter Street Underpass is part of the Springfield Rail Improvements Projects. It will relocate all passenger and freight traffic from the Third Street corridor to Tenth Street.

The archeology dig from late September – October 2014, discovered seven foundations of homes at a block once considered as the Gateway to the “Badlands”. Five of the homes found in the Badlands footprint were burned down as a result of the 1908 Race Riots.

According to a January 5, 2015 State Journal Register article, this site was covered up with dirt after the Race Riots and a lumberyard existed over the property. St. John’s Hospital eventually bought the property and it became a parking lot. The property remained covered for nearly 100 years until unearthed during the archeological study connected with the Carpenter Street Underpass project.

Many participants who attended the March 10 Federal Railroad Administration public hearing led by Hanson Engineering were discouraged from making public comments. Some participants were not able to submit comments on the computer tablets provided at the meeting due to poor internet connection in the basement of the Prairie Capitol Convention Center.

Documents submitted to the House committee were the result of a FOIA request by the Faith Coalition For A Common Good to the Illinois Historic Preservation Agency.

As documents become available through freedom of information requests, they will be added to this webpage.  These documents are in date order. 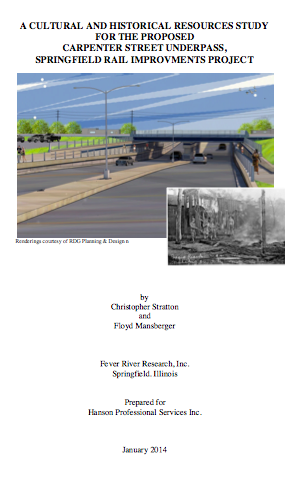 The study was to ‘identify historic properties potentially eligible for inclusion on the National Register of Historic Places” in the Carpenter Street Underpass project area.

The research notes which blocks have a high potential for uncovering archeological finds from the 1908 Race Riots utilizing historical maps and newspaper reports.  A historical context and results of the research investigations are provided in great detail.

The nearly 100 page study is broken up in 4 separate parts due to data size.  Each part is approximately 4 M.B. – 7 M.B. to download easily.

April 4, 2014:  Letter from Andrea Martin at the Federal Rail Administration to the Advisory Council on Historic Preservation to enter into a memorandum of agreement to facilitate compliance with Section 106.

Enclosures to the letter include: