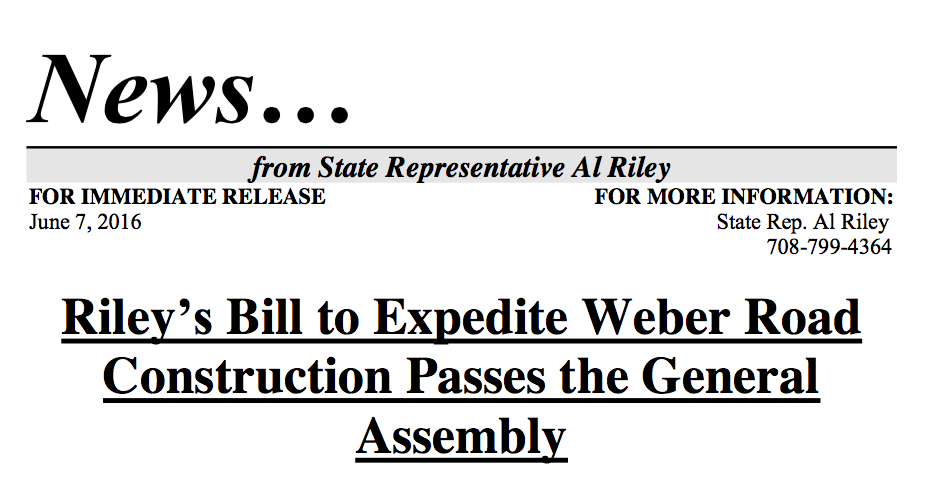 SPRINGFIELD, Ill. – A major Will County transit project is a step closer to reality as a result of legislation passed by state Rep. Al Riley, D-Olympia Fields, which will help local officials expand Weber Road and reduce traffic congestion around Interstate 55.

“The county’s current acquisition process is one that is lengthy and is not benefitting motorists or the taxpayers who are funding these road renovations,” said Riley. “I am all about efficiency and this bill does just that; it allows Will County government to run fluidly and efficiently.”

Riley received bipartisan support in the House and in the Senate for House Bill 1191, which would help Will County acquire land needed to complete a diverging diamond interchange at Weber Road near Interstate 55. Will County has been involved in an extensive legal process to acquire land needed to complete this traffic-reduction project, but estimates that without Riley’s legislation the project could be delayed upwards of three years.

“This bill passed both chambers because it is solid policy and because legislators on both sides of the aisle were willing to come together for the good of the people,” said Riley. “I would like to see the Governor follow our lead in working together and urge him to support this and other capital and economic development projects in and around Will County.”

Passing both chambers, this measure will be sent to the Governor’s desk for finalized approval and signage into law.