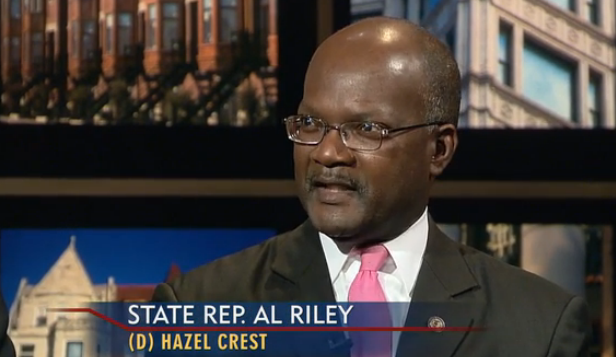 State Representative Al Riley credits his decision to pursue a life of public service to his father. Sam Riley had been a union steward with UAW Local 6 and a leader in the Chicago civil rights movement early in his career.  Later, the elder Riley administered the Model Cities program under the federal Office of Economic Opportunity and served as Director of Fair Housing and Equal Opportunity for Region 5 of H.U.D.  Under his father’s tutelage, young Riley made a decision to pursue an eclectic career of public policy and quantitative research while in his teens.  In the summer of 1967, Riley was a Headstart teachers’ aide at the age of 14.  His achievement and analysis on outreach to minority populations led to a meeting with R. Sargent Shriver, the Director of the Office of Economic Opportunity under President Lyndon Johnson.

Professionally, Riley is an urban planner and statistician. Prior to coming to Springfield, Riley’s career included service on the research staff of the American Society of Planning Officials (nee APA) in the early ‘70’s.  Some of his other areas of service include being a Chief Planner and Director in county government, Director of Institutional Research and Planning for Thornton Community College and Director of Biostatistics and Computer Services for the Illinois Cancer Council.  He also served in executive positions in the private sector.  Riley also taught urban studies and public health planning at the University of Illinois at Chicago, and was an adjunct professor of Public Administration and Statistics at Governors State University for eleven years.  He has written in the diverse areas of cancer clinical trials, housing, labor economics, educational research and health planning, and presented papers or seminars in those fields. He holds Bachelors degrees in Economic Geography and Secondary Education from Chicago State University, Master of Urban Planning and Policy Analysis and Statistics, and Doctoral study in Public Policy Analysis from the University of Illinois at Chicago.   Riley is a long time member of the American Planning Association, American Institute of Certified Planners, the American Statistical Association and the American Educational Research Association.

Since coming to Springfield, Representative Riley’s focus has been to use his professional and political experience in advancing the issues of resource allocation and equity for the Southland region of the Chicago metropolitan area. Specific problems initially faced in the region included mass transit and transportation inequities, education funding reform, property tax relief and reform, and a lack of coordinated economic development. Working with other dedicated members of the General Assembly came legislation which addressed many Southland concerns.  The landmark Mass Transit bill included a permanent south suburban seat on the Metra board, money for innovative transit solutions for PACE, a bond issue promise for new cars and improvements on the Metra Electric line and development of the SouthEast Service line. Riley pledges to continue work on the passage of education funding reform, especially comprehensive education bills which equitably provides funds to Illinois students while simultaneously reducing property taxes.

Riley’s other elected positions include three terms as Trustee in the Village of Olympia Fields, Trustee, Rich Township and Rich Township Supervisor.  Riley also served on active and Reserve duty in the U.S. Army from 1972 to 1978 in the branches of Psychological Operations and Civil Affairs.

Representative Riley has served on many civic and charitable foundations including the executive boards of the Boy Scouts of America-Calumet Council, Illinois Philharmonic Orchestra, Jazz in the Park for Charity, Unity Coalition of the South Suburbs and the UIC College of Urban Planning Alumni Association.   He is also a member of the Alpha Phi Alpha Fraternity, Theta Mu Lambda Chapter.